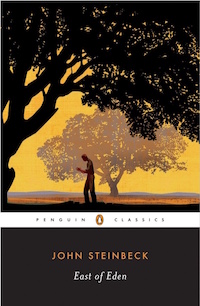 I just finished John Steinbeck’s East of Eden. I’ve been working on it since early spring.

It’s a good book. The best thing about it is that it wrestles seriously with the question of our own depravity in a way that doesn’t glorify or even excuse our wickedness. I’m convinced that Steinbeck’s knowledge came from a deeper understanding of depravity than even Evangelical Christians now possess.

Steinbeck’s insights about motivations and desires really leaped off the page. In many cases, I had only recently learned about them by reading Dan Allenders book, Wounded Heart. In fact, I’m not sure I would have understood what I was reading if I hadn’t read Allender first. Allender writes about how the suffering we experience causes us to put up self protective barriers around our souls, and that’s really the question that Caleb faces: is he going to love and live, or is he going to shut himself off in bitterness and anger?

There’s much to like about East of Eden, but I probably wouldn’t give it more than 3.5 stars. Why?

The philosophical foundation of the book comes from Steinbeck’s understanding of the Cain and Abel story in Genesis 4:

4 Abel, on his part also brought of the firstlings of his flock and of their fat portions. And the LORD had regard for Abel and for his offering; 5 but for Cain and for his offering He had no regard. So Cain became very angry and his countenance fell. 6 Then the LORD said to Cain, “Why are you angry? And why has your countenance fallen? 7 “If you do well, will not your countenance be lifted up? And if you do not do well, sin is crouching at the door; and its desire is for you, but you must master it.”

The point of the book pivots on the meaning of the Hebrew word timshel in verse 7, translated must above. Steinbeck believes it should have been translated “may”, meaning that we have a choice between good and evil, and we must choose the good. The two sons in the book inherit a whole boatload of wickedness along their family line, and Caleb must decide if his fate as a wicked man is sealed, or if he’s going to fight to be good.

It’s interesting, though, that the ending depends on Adam Trask, Caleb’s father, giving Caleb his blessing and releasing Caleb from the guilt he feels. So there is not just a recognition of or wickedness, but also recognition of the pardon we so desperately need. To live, Caleb must have his fathers pardon:

It’s powerful stuff, and most surely better than much of the claptrap that passes for literature these days. And yet it’s sad, since it’s the last gasp of a liberal Christianity that has turned away from Jesus Christ. According to the Oprah.com page about the book: “As much as we inherit Cain’s curse, we also inherit his ability to redeem himself.”

It’s a Christless Christianity, which is like a ship on the sea without an anchor or a rudder. It’s a kiss and a promise — or perhaps a hope deferred, leaving me feeling sick.